From A White Dress To A White Mess

Date: October 30, 2018
Title: From A White Dress To A White Mess
Models: Veronica Leal
Site: virtualtaboo.com
Description: Since nobody else was around, Veronica Leal's mind quickly turned naughty for this rare opportunity. She began teasing herself by slowly removing her white dress as she kneeled on her sofa, and before she knew, her beautiful asshole was completely exposed. As she felt a little bit of wind caress her ass, Veronica decided to reveal her big tits as well, which started to make her hornier than ever before. As she laid down on the sofa, she spread her legs and slowly inserted some fingers into her slit. Her fingers slid in with ease as liquids were oozing out of her, she was quite aroused. However, before she continued her fingering session, she teased herself a bit more by caressing her tatas and completely removing her dress. Now that she was completely exposed, she spread her pussy lips before removing her sneakers and turning into the doggy position. Once her horny levels reached her maximum potential, she began to rub herself slowly. Veronica had a big smile on her face, and as she kept on rubbing, she began to moan due to the overwhelming pleasure that she was experiencing. She kept whirling her fingers faster and faster as various emotions were running through her body, eventually, she closed her eyes and felt like she was in heaven as she began to scream loudly. Without stopping to pleasure herself, she soon found herself with the best orgasm in her life, making a nice white mess on the sofa and her fingers. 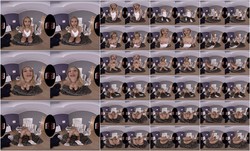