Date: December 04, 2018
Title: Dress To Impress
Models: Lilli Vanilli
Site: virtualtaboo.com
Description: After a long day at work, Lilli Vanilli was finally home. As she entered the living room, she noticed that nobody else was inside, so she decided to use the opportunity to have some fun all by herself. As she sat down on the floor, Lilly slowly started to caress her big tits over her gorgeous red dress, and as she was playing with her knockers, she slowly lifted her dress upwards. Once her black panties came out into the open, Lilli started to rub her pussy with her palm, slowly turning herself on. It didn't take her too long towards the couch, where she would get into her favorite position before she stripped off her clothes. Once she removed everything besides her black high-heels, Lilli Vanilli spread her legs as wide as possible while laying on the couch, as if she is going to get fucked in the missionary position. However, instead of getting fucked by a hard cock, she took care of herself by slowly rubbing her now revealed pussy, and she only made herself hornier and hornier. When Lilli felt that her cunt is oozing with juices, she decided to plunge two of her fingers inside of her love tunnel, and upon doing so, she made a loud moan due to the sudden sensation that she felt. After that, Lilli continued thrusting her fingers in and out of her slit, making herself moan continuously, all the way until the point until she came on the couch that she was masturbating on, finishing her incredible solo session with a bang. 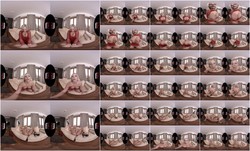